Meg had severe stomach problems – she:

On this pic you see how swollen Meg is. This is before reflexology. 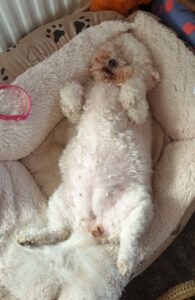 The first blood sample 4th January showed that Meg’s liver count (ALT) was very elevated. IT WAS 1308 AND THE NORMAL RANGE IS 0-40. An X-ray showed an enlarged liver, but the cause was unknown. 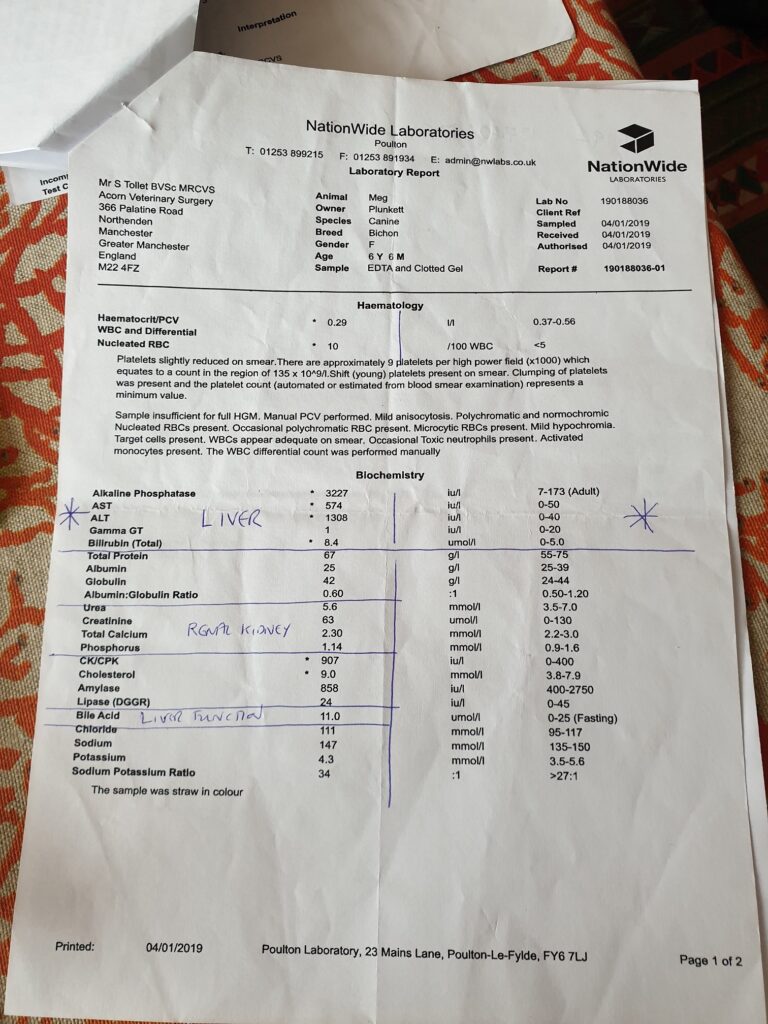 ADRENAL CORTIC HORMONES DID NOT HELP, ON THE CONTRARY

The vet gave her adrenocortical hormone and after 1 month a new blood test showed that the liver count had become even higher (from 1308 to 1466), but the vet continued the same treatment. Here is the blood sample 2 from 2th February: 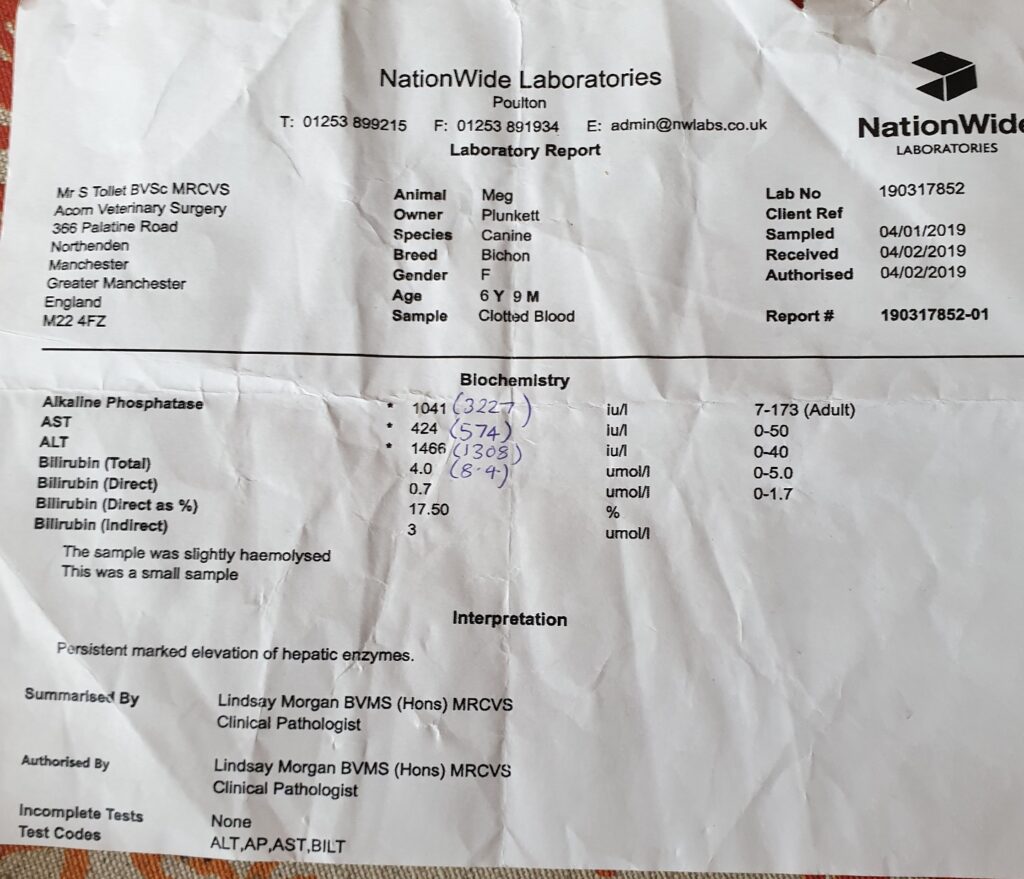 Because I was in Manchester to teach, I was able to give Meg intensive reflexology for 3 days and taught the owner points to massage on Meg. I also suggested homeopathic medicine together with the adrenal cortic hormones.

The elevated liver counts only decreased when she received reflexology

11 days later a new blood test showed that: The liver count HAD FALLED FROM 1466 TO 510 – fantastic as it has helped Meg. Here is the last blood sample: 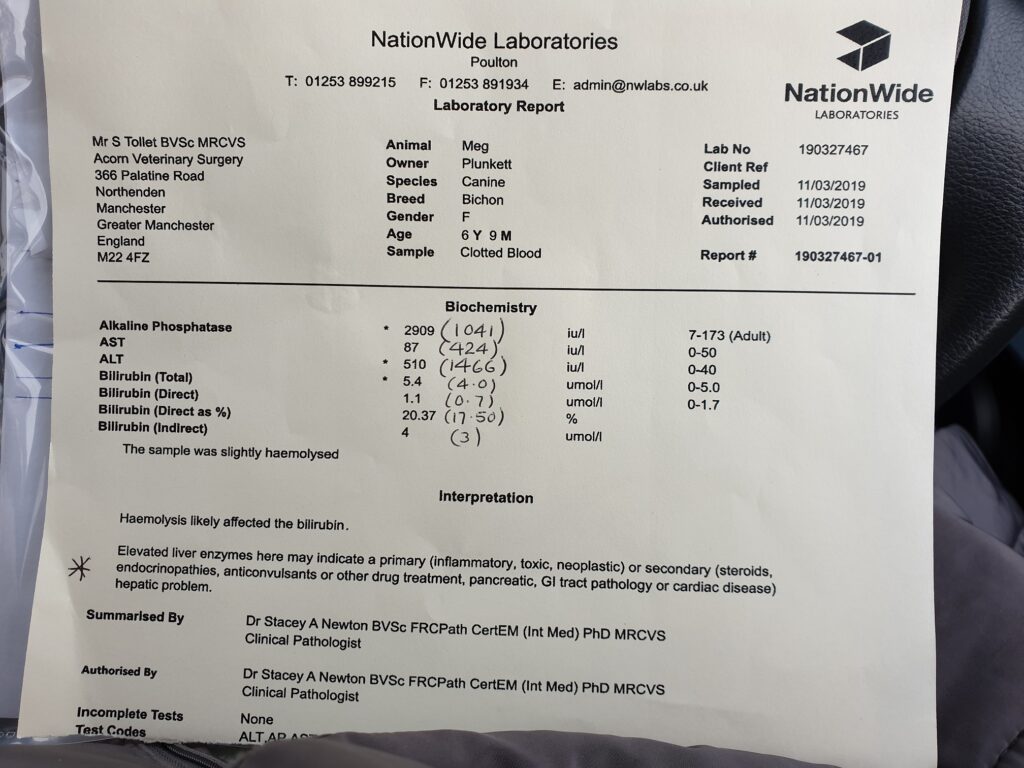 Meg after reflexology – the swelling is gone and she is able to lie on the stomach! 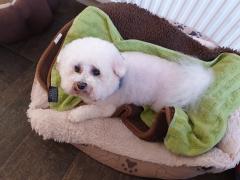 Meg now is eating, playing and having good walks. The owner is continuing with her reflexology and homeopathy, so we get the liver counts completely right. The vet has taken Meg off the adrenal cortex hormone and has recommended reflexology and the homeopathic medicine, that I suggested. Here you see a healthy Meg who can now lie on her stomach.

If you want to learn how to help dogs like Meg, join our course or education in reflexology and acupressure for dogs. 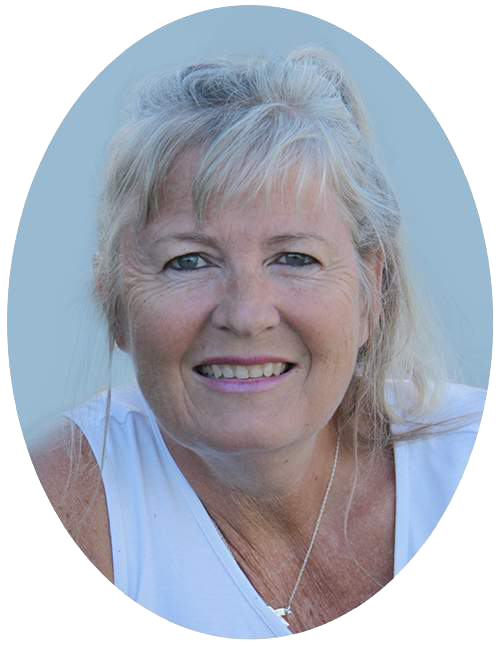 Vivian Birlie is a reflexologist, acupuncturist and author. Since 1997 she has treated both humans and dogs. She has been teaching reflexology and acupuncture since 2000.

During her long-time as an educator, Vivian Birlie has authored a great deal of teaching material. This background, along with 16 years of experience in journalism and technical computer knowledge at the Danish Broadcasting Corporation, has made Vivian’s  books possible.

Her 2 books about dog reflexology and acupressure in English are:

She teaches at her Sano Canis Institute, which offers a one-year veterinarian certified dog reflexologist education. It takes place in Denmark and England - Read more abot dog reflexology.  Vivian also gives lectures and teaches courses in human acupuncture and reflexology. On her facebook page, you can get good advice on how to relieve the most common disorders in dogs and cats.

We use cookies on our website to give you the most relevant experience by remembering your preferences and repeat visits. By clicking “Accept All”, you consent to the use of ALL the cookies. However, you may visit "Cookie Settings" to provide a controlled consent.
Cookie SettingsAccept All
Manage consent

This website uses cookies to improve your experience while you navigate through the website. Out of these, the cookies that are categorized as necessary are stored on your browser as they are essential for the working of basic functionalities of the website. We also use third-party cookies that help us analyze and understand how you use this website. These cookies will be stored in your browser only with your consent. You also have the option to opt-out of these cookies. But opting out of some of these cookies may affect your browsing experience.
Necessary Altid aktiveret
Necessary cookies are absolutely essential for the website to function properly. These cookies ensure basic functionalities and security features of the website, anonymously.
Functional
Functional cookies help to perform certain functionalities like sharing the content of the website on social media platforms, collect feedbacks, and other third-party features.
Performance
Performance cookies are used to understand and analyze the key performance indexes of the website which helps in delivering a better user experience for the visitors.
Analytics
Analytical cookies are used to understand how visitors interact with the website. These cookies help provide information on metrics the number of visitors, bounce rate, traffic source, etc.
Advertisement
Advertisement cookies are used to provide visitors with relevant ads and marketing campaigns. These cookies track visitors across websites and collect information to provide customized ads.
Others
Other uncategorized cookies are those that are being analyzed and have not been classified into a category as yet.
GEM & ACCEPTÈR
New online education 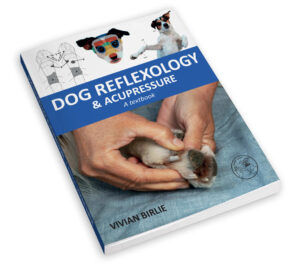